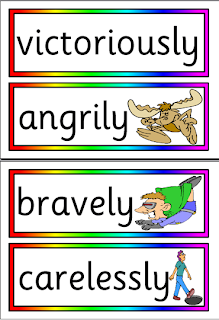 3.  ADVERBS MODIFY OTHER ADVERBS
Adverbs may also be used to modify other adverbs.
The dog ate quickly.
The adverb quickly modifies the verb ate and shows how the dog ate. By adding another adverb, we can find out how quickly the dog ate, as follows:
How quickly did the dog eat? The dog ate very quickly.
WORDS ENDING IN “LY”�
Many adverbs are often made by adding ly to an adjective.
* Check the dictionary if you are unsure about the correct spelling of any word.
WORDS THAT ARE ALWAYS ADVERBS�
Some words can only be used as adverbs, never as adjectives. A list of these words follows. The only way to remember these words is to memorize them, and learn to recognize them in sentences.


In the section on verb phrases, you learned that some small words can be
found in the middle of verb phrases, but they are not verbs. Those words are
adverbs.
He was always asking questions.
He will never tell another lie.
Eric will not shop on Sundays.
I have often wondered about the moon.
WORDS THAT MAY BE ADVERBS OR ADJECTIVES
A few words can be used as adverbs or adjectives. Three examples of such words are early, fast, and late.
The train arrived early. (adverb) It was an early train. (adjective)
Penny drives fast. (adverb) Penny is a fast driver. (adjective)
A student is late. (adverb) There is a late student. (adjective)
Exercise 9: Adverbs
Copy these sentences in your notebook and then underline the adverbs.
1. They arrived early for class.
2. Can you come soon?
3. She placed the crystal vase carefully on the table.
4. You cannot drive there!
5. The bus will arrive here at noon tomorrow.
6. Yesterday, the strikers blocked the driveway effectively
7. Rick gave his girlfriend an extremely expensive gift.
8. Kate is a truly courageous woman.
9. They finished their work surprisingly quickly.
10. The weather turned really hot at the beach during this last week.
Exercise 10: Adverbs
Copy these sentences in your notebook and then underline the adverbs.
1. Computers are relatively new devices.
2. Many businesses use them daily.
3. Today, very fast computers are needed.
4. They produce statistics quickly and accurately.
5. Generally, they are quite easy to use.
6. Many people have never used a computer.
7. The baby has been very cranky lately.
8. Finally, she wrote the very last sentence correctly.
9. She smiled brightly and said that she was really sorry.
10. Politely, he asked for a second helping.