GRAMMAR ROCK: PRONOUNS
Pronouns refer to and replace nouns (the names of people, places, and things) that have already been mentioned, or that the speaker/writer assumes are understood by the listener/reader. For example, “I want you to read this again.” The words I, you, and this are pronouns. In this sample sentence, it isn’t necessary to actually see the nouns (writer, reader, and sentence) because the writer’s/speaker’s meaning is obvious. 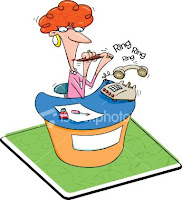 Write a sentence about this picture.
Use pronouns instead of nouns.

Examine the sentences below. For each pronoun printed in bold type, think of a noun it could replace:


She saw it when they bought it.
(e.g. Sue saw the dog when the boys bought the dog.
Everybody was glad when it was over.
The candy that we gave them was made last year.
What did you buy from them?
It barked loudly and then wagged its tail.
Some of this is important to me
When she heard herself on tape she was embarrassed.
We were surprised when they did the laundry themselves.
Who bought those from you?
Fill it up, please.
Many signed up, but few were chosen.
We planted them, but the birds ate everything.

Exercise 3: Pronouns
Copy these sentences into your notebook, and then underline all the pronouns you can find in this exercise.
1. Many of them came, but few stayed long.
2. Give everybody something to eat before they leave.
3. What did you bring with you?
4. Did they teach themselves how to speak German?
5. After she cut herself, she went for a tetanus shot.
6. All of those are expensive.
7. Who likes chocolate?
8. The stones on the beach were green, but these are pink.
9. None of us was frightened by that.
10. He gave her several bottles of this.
Exercise 4: Pronouns
A.   Copy these sentences into your notebook and then underline the pronouns.
1. Who told us that no one would be at the mall?
2. This belongs to her.
3. She never gave them any of it.
4. Phillip called to tell them about that.
5. What did you give him and his wife for Christmas?
6. We always welcome suggestions.
7. Mine was destroyed by the flood, but the insurance covered it.
8. Give me some!
9. They told about the hardships we survived.
10. Many told about the kindness of strangers.
B. Write 10 sentences of your own. Underline all the pronouns you used