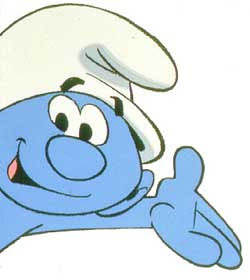 ADJECTIVES
To talk or write about a person place or thing, you use nouns like girl, house, or tree. To add descriptions to those nouns that give the reader a clearer picture of what you mean, you add “detail” words in front of the noun like little, blue, rich, old. Words that tell more about nouns or pronouns are called adjectives.

GRAMMAR ROCK: ADJECTIVES
An adjective is a word which describes or modifies a noun or pronoun. A modifier is a word that limits, changes, or alters the meaning of another word. Therefore, an adjective limits, changes, or alters the meaning of a noun or pronoun. Adjectives are usually placed before the noun.
the white, puffy clouds
a happy, carefree child
some tall, stately trees
a rich dark chocolate layer cake
five huge leafy bushes
Here’s another way of thinking of adjectives:
Imagine that you are in a large meeting room full of people. Your boss tells you, “Give this piece of paper to the woman”. The only problem is that there are twenty-three women in the room. To which one should you give the paper? Your boss might have said “the tall woman”. The word tall is an adjective and somewhat helpful, as only six of the women are tall. To which tall women should you give the paper? Perhaps your boss said, “the tall, blond woman with the red dress”. The words tall and blond are adjectives that help you pick out a specific woman from a large group. In other words, these adjectives limit the noun woman to one specific person.
The group of words “with the red dress” is also a form of adjective that helps limit the meaning to one particular person. You will learn about these groups of words later in this module. Examine the sample sentences below for a better understanding of adjectives.
I have a car. I have a blue car. I have a small dark blue car.
The first sentence does not tell anything about my car, only that I have one. The second adds the adjective blue. This descriptive word makes the sentence more interesting and helping the reader “see” your car in his/her mind’s eye. The meaning of the word car has been limited from all the cars in the world to only those that are blue. The third sentence adds even more details. Other adjectives like shiny, new, cool, powerful could be added that would further limit the meaning of the word car or tell what kind it is.
Adjectives also tell how many, as in many people, several candies, and four children. Words which limit the noun by telling which one or ones are also adjectives. Such adjectives include this, that, these, and those, as in this car, that coat, these boots, and those houses. These are demonstrative adjectives.
This book belongs to Pete; those pencils are Ted’s.
This and those are adjectives because they come in front of the nouns book and pencils. This and those modify or limit the meaning of the nouns book and pencils.
The words this, that, these, and those can be used as either adjectives or pronouns. Compare these two sentences to clarify the difference between their use as adjectives and pronouns.
This belongs to Pete; those are Ted’s. (pronouns)
Pete bought this Ford, and Ted bought that Chevy. (adjectives)
This and those are pronouns in the first sentence because there are no nouns in the sentence for them to modify. The nouns they “stand for” or replace were probably mentioned in an earlier sentence. In the second sentence, this modifies the proper noun Ford; that modifies the proper noun Chevy.
Compare the meaning of these two sentences.
I have a blue car. I have the blue car.
The words a and the change the meaning of the word car. Although some grammar books call them indefinite (a, an) and definite articles (the), others called them adjectives. Either is correct.
Sometimes nouns can be used as adjectives. Glass, kitchen, and school are usually nouns. Used in the following ways, however, many grammar books call them adjectives:
I could see that he had a glass eye.
Hang the kitchen clock above the refrigerator.
Do you know the value of that school book?
In cases like these, if you are asked to identify the part of speech for glass, kitchen, or school, there are two right answers: noun and/or adjective.
Examine these sentences that demonstrate this use of adjectives.
The big orange school bus pulled up beside those leafy maple trees.
Write a sentence or two about this man that clearly describes him to someone who cannot see the picture. Underline all the adjectives you used. 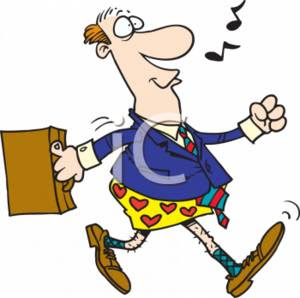 Exercise 8: Adjectives
A.   Copy these sentences in your notebook and then underline the adjectives
1. The little girl ran along the dusty road.
2. Six delicious cookies were cooling on the rack.
3. The dark brown painted dripped on the new white carpet.
4. A beautiful red rose bloomed in a quiet corner of that flower garden.
5. The old curtains were torn and faded, and they flapped in the light breeze.
6. After a few hours, they arrived at the train station, nine miles from Minto.
7. The hockey arena is located on Water Street beside the steel mill.
8. They used paper plates for the annual picnic.
9. These apples are juicy and red.
10. The long summer months are usually hot and dry.
B.   Use the paragraph you wrote in Exercise 7B. Rewrite it using enough adjectives
Exercise 9: Adverbs
Copy these sentences in your notebook and then underline the adverbs.
1. They arrived early for class.
2. Can you come soon?
3. She placed the crystal vase carefully on the table.
4. You cannot drive there!
5. The bus will arrive here at noon tomorrow.
6. Yesterday, the strikers blocked the driveway effectively
7. Rick gave his girlfriend an extremely expensive gift.
8. Kate is a truly courageous woman.
9. They finished their work surprisingly quickly.
10. The weather turned really hot at the beach during this last week.